At Pitreavie we work with a wealth of suppliers around the world. There are constant changes in packaging technology related to your sector, whether it’s food, cosmetics, manufacturing or pharmaceuticals. The packaging industry invests in research and development to design products that are more durable, lightweight, secure, and environmentally friendly.

All of these add up to cost savings. More durable packages reduce the probability of transit damage. Lightweight packaging limits the amount of space you take up in carrier trucks. Secure packaging reduces the probability of spoilage and damage. Your brand reputation also benefits from environment-friendly products.

Our expert packaging team will advise you on the most cost effective way in which to leverage new materials to reduce your overall packaging cost.

With every company looking to maximise space, it is important to consider the costs associated with storing your packaging materials. You may struggle to find room for the large amounts of corrugated cardboard, paper, and plastic you use to package and ship materials.

Unfortunately, some companies feel they are forced to buy in bulk to reduce costs to a manageable level. Some are faced with long lead times and are therefore forced to carry large stock levels to cope with any sharp rises in demand. It also goes without saying, the more storage space you dedicate to packaging material, the less space you have for finished product.

Instead of shipping all of your corrugated cardboard and paper orders directly to you, Pitreavie will hold stock of all your packaging materials, ready to be called upon at a moment’s notice.
You might be concerned about cutting it too close and not having the packaging you need in time. If that’s the case,we can offer pre-scheduled or automated releases of packing materials based on your company’s historical data.

By taking a holistic approach to cost savings, our packaging experts will identify ways to improve your packaging process without compromising on quality.

Reduce transport costs and save CO2

The cost of transportation is a major issue whether you are using your own vehicles or operating through courier companies.

Packaging can have a major impact on the costs, whether its optimising the box size to get more per pallet or increasing the specification to dramatically reduce product damage.

At Pitreavie we employ a specialist design team who can work with you to examine your current shipping methods and advise on different material and pack size configurations. Our shipping yield software allows us to maximise pallet optimization.

Your workforce could be spending valuable time on the following time-consuming tasks in the packaging process;

We manufacture a full range of quick assembly corrugated boxes as well as boxes suitable for case erecting automated lines.

One of the most time-consuming steps of the packaging process is taping and sealing. A poorly sealed product has a higher chance of damage and return.

Automation can play a key role in boosting your productivity;

Not only can our expert team work with you to identify opportunities we employ bespoke software to audit and demonstrate overall cost savings.

Product damage costs your business in many ways. When a customer returns a damaged product, manufacturing, packaging, shipping, and returning it are all sunk costs. Moreover, you’ve possibly damaged your relationship with your customer. There are two leading causes of product damage: poor packaging and transit damage.

Our expert packaging team will work with you to determine the best way to eliminate damaged product. We have a variety of products that can improve load stability, reduce harsh vibrations and improve burst and crush strengths.

Designing your packaging to reduce waste

This is usually the most cost-effective option and the best for the environment. There are a variety of ways of achieving this and both our design and packaging teams will work with you to help.

It can be tempting to use multiple suppliers to chase the best prices and to spread the business, however, the cost of administration can mount up.

Depending on what journal you read, the cost of processing and paying an invoice can cost anything from £10-£25.

This does not include the amount of time you spend chasing late deliveries, questioning discrepancies and haggling over prices.

Now consider the alternative. One monthly invoice, covering all your supplies. 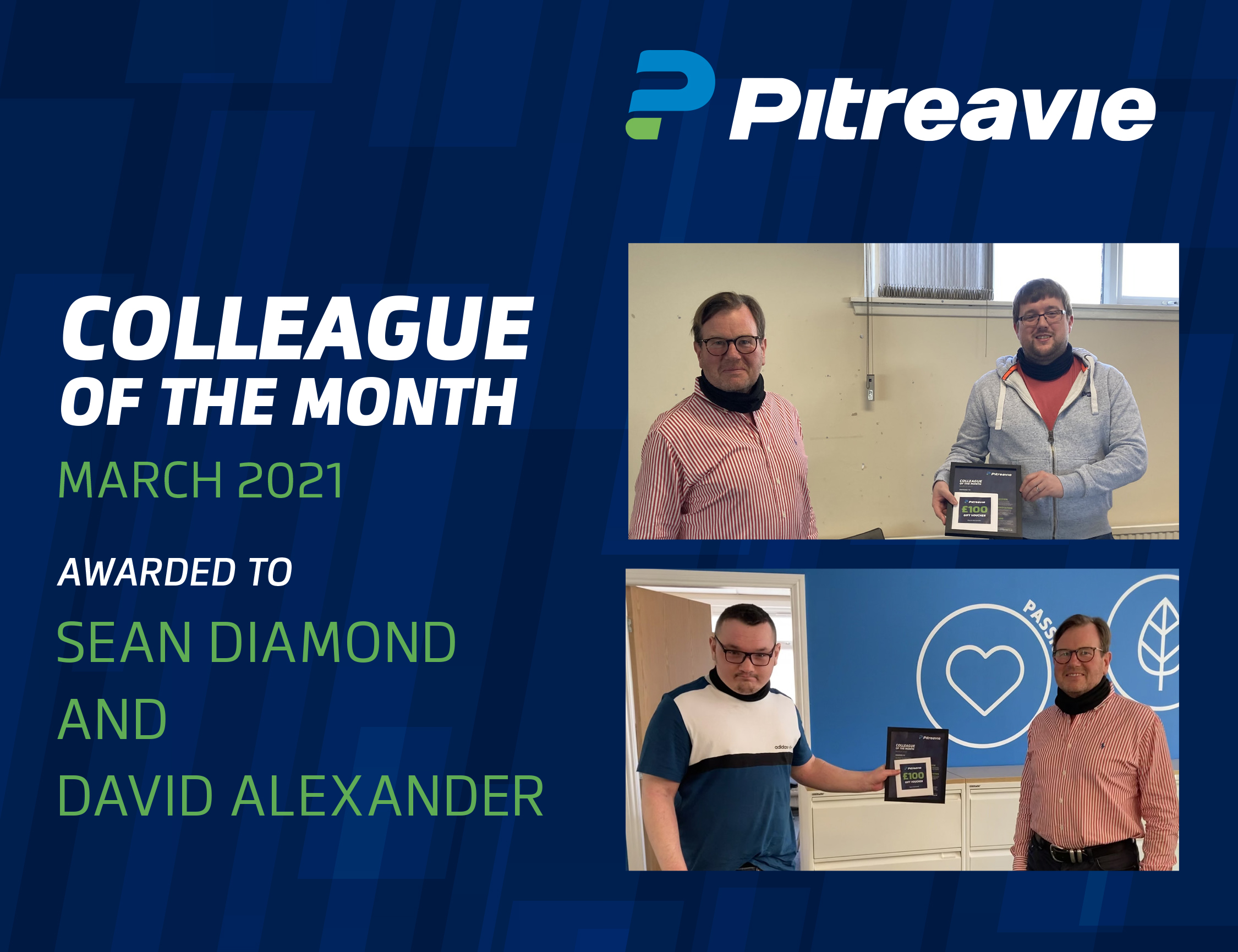 The results are in for March 2021's colleague of the month award, and this time it's a double celebration!

David was nominated by Financial Controller Diane Bell and Systems Co-Ordinator Yvonne Marshall. David received his award due to his display of the Pitreavie core company values: passion, innovation and care.

Passion - David has been nothing short of brilliant as part of the ERP team, and has driven the project forward whilst also managing his own team. David pro-actively commits to additional hours as needed including weekend working too, which is admirable considering he has a young family at home.

Innovation - David has become one fo the go to members of staff for problem solving on our new ERP system and is always thinking of ways to make things better for everyone at Pitreavie, not just his own team.

Care - David worked hard throughout lockdown to maintain 1-2-1's with all of his team members. He also went the extra mile to offer support to team members who had childcare commitments alongside working from home.

Passion - Sean has excelled in the drive to push on in his new role as commercial analyst and has really stepped out of his comfort zone.

Innovation - Sean has worked hard to supply data for his colleagues to support change and growth. He is also willing to take on more work and is open and enthusiastic about new ways of working.

Care - Sean has been a great support to his colleagues and has really supported the workload of his colleagues alongside his own. He contributes positively during discussions and meetings, taking great care in his new role.

Congratulations to both of our winners. David & Sean were both presented with certificates and £100 M&S vouchers by MD Stephen Heslop!

Back to Hub Next Article
News
Add Tagline

We Are Here For You

Pitreavie Out of Hours Support